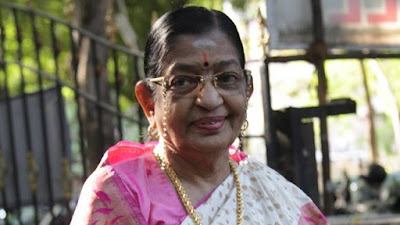 -       Yesko Bullemma  at https://www.youtube.com/watch?v=Qn9oRIJzVd8, a Salil Choudhry rollicking feast !!!! Vampisheness of the mistress of a toddy shop !!!!

https://www.youtube.com/watch?v=fF_P01DOlbI,  the essence, the flavor of Tamil emanating from every pore of the song

-       Paruvam enathu paadal  https://www.youtube.com/watch?v=94tYRNOXqQc, a MSV path breaker, he called her’s as the only “melodious , auditorium” voice. Here’s the voice ripping through our consciousness  melodiously , verily the milky way piercing through the dark skies

A TG Lingappa classic.  Hushed, halting bashfulness expressed in its womanly magnificence. She croons, doesn’t not go open throated, croons through lightning akArams and the expressions simply happen, a definition for singing for a heroine.

Bhaktha Sabari just about manages to sing with her worn out vocals !!!! P. Susheela’s voice quivers with devotion and excitement, being truly overwhelmed in the presence of the avatar but with the entire spectrum of emotions smothered by old  age. Yet, amidst the “old age” tremolo, every note is in place and every phrase in tune.

A Sathyam creation in Toofan Mail….well she could be caricaturist as well you know !!!!

About the Author
Mr. Sriram Lakshman worked across the globe as a Software professional for 25 years.  Presently indulges in healing, deep spiritual pursuits and bringing to South India the path he subscribes to which is elaborated at www.padmacahaya.com. Out of personal interest did fair amount of research work on Indian Film music of the 50s and 60s with accent on Hindi and Tamil songs. Founder Trustee of msvtimes.com a website  dedicated to discuss the works of MSV. Msvtimes.com conducts regular research oriented programs and annual musical programs to highlight nuances of MSV's music. He comperes all these programs  A part of P. Susheela trust that is geared towards providing financial support to needy musicians, he acts as a coordinator for fund raising programs for the same.

Music of Madras
“Music of Madras” is brought to you by MDnD Entertainment Private Limited. Music of Madras is a digital platform for discovering live events in music, dance, drama and stand-up comedy in Chennai. Besides many other features , users can also buy tickets through the android app and website.